This is the beginning a series of “talks” on the Book of Job in relation to reconciling Science and Religion by Dr. Josh Stewart.

God has endowed man with intelligence and reason whereby he is required to determine the verity of questions and propositions. If religious beliefs and opinions are found contrary to the standards of science, they are mere superstitions and imaginations; for the antithesis of knowledge is ignorance, and the child of ignorance is superstition. Unquestionably there must be agreement between true religion and science. Baha

The dichotomy between religion and science is often conflated with the more fundamental debate concerning creation and evolution. To an extent there is a link, but it is important to recognise that the former are structural disciplines, each within its own right; whereas the latter are predicated on abstract theoretical arguments.

In essence, there will never be a complete reconciliation between science and religion because each paradigm is unique and has its own historicity. Nonetheless, common ground can be found and the starting point is language. Without the faculties of speech and reason, special gifts with which only humankind seems to be endowed, the debate would be somewhat irrelevant.

The Book of Job encapsulates many of the central themes germane to this discussion: God, human destiny, suffering, theodicy, faith, devotion, ritual, the soul, life after death, the search for wisdom and understanding, medicine, psychology [loss, grief and trauma], wealth, power, friendship, literature, anthropology, geography and astronomy. As such it will be used as a starting block.

Job belongs to the Wisdom Literature of the Old Testament and in the Hebrew tradition [Tanakh] is to be found within the Ketuvim [Biblical Hebrew “Writings” – Greek “Hagiographa”]. This is at variance with its location in Christian versions of the Bible and the Syriac Peshitta, but makes for ease of reference during research.

Described as A Drama of the Human Soul, the book fulfils the criteria of excellence and scholarship needed to rank it alongside the classics of first magnitude: Homer’s Odyssey and Virgil’s Aeneid, Dante’s Divine Comedy and Milton’s Paradise Lost, Goethe’s Faust and the great tragedies of Shakespeare. Poets and writers, artists and sculptors, philosophers and theologians, and critics in every generation have delighted to confer on this masterpiece the highest accolades.

Profuse has been the praise heaped upon the book by men who themselves are richly endowed with spiritual perception. Alfred Lord Tennyson called it “the greatest poem of ancient or modern times”…while William Blake drew from its lines the necessary inspiration for his mystic art. 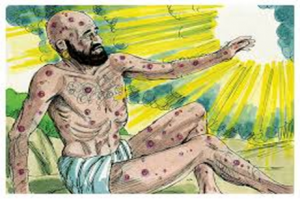 I had heard of Thee by the hearing of the ear; but now mine eye seeth Thee. [Job xlii. 5]

— Dr. Josh Stewart
As part of his academic training, Dr Stewart did an MA in Intertestamental Studies at University College London. The interwoven themes of the degree have since been developed and refined and nowadays provide an ideal grounding for current research into the Wisdom Literature of the Old Testament, especially the Book of Job. Dr Stewart is of the opinion that Job provides a unique insight into the conundrum of reconciling the trials and tribulations of human existence within the framework of spiritual aspiration. He argues that the epiphany of Job reveals a creative principle, the sole domain of God, which governs the material universe. It makes Job realize that he can only stand in awe of such power and majesty, whilst at the same time acknowledging the frailty of all human knowledge. Be that as it may, the epilogue concludes with God validating Job’s quest for understanding and thus implies that humanity is justified in exploring all possibilities.